Lotte Andersen on “Fragments From The Esprit...

Lotte Andersen on “Fragments From The Esprit Family” 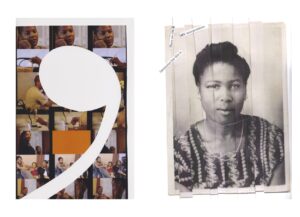 Fragments from The Esprit Family

PS: Tell me about your pandemic. You were stuck in Peru for a bit?
LT: My partner is Peruvian and we travelled over for a show he was working on at the end of February 2020, just before the pandemic hit. They shut the airport for most of that year for international travel and by November, after eight months there was a military coup in the country. It felt quite unsafe and we considered how artists have worked or ensured their practices survived political instability. At the time I read the Peggy Guggehien biography, where the biographer shared an anecdote about Juan Miro dressing as a cheese farmer with his work rolled up in a bag. We had a chat about what to do and decided to travel for a while until we could decide on a base. The first place we visited was Mexico.

PS: You’re in Mexico at the moment, how has it been?
LT: Spending time in Mexico has been invaluable but I am back in Lima at the moment. I love Mexico and the art scene in the capital, I find the pace and mood of the city incredibly accelerated and radical. I find it extremely exciting to meet artists like Leonel Salguero, Débora Delmar and Nico Colon, and working in the same city as designers like Sofia Elias. You hit up against a lot of different energy in a short space of time. I work mainly in my studio day to day with Juan and Alonso.

PS: What have you been working on since arriving?
LT: When we first arrived, we travelled around the coast of Oaxaca and I started making the Esprit family collage series. I worked in local printing and copy shops using an archive of images I gathered from my Dominican grandmother in 2017. Some are Carnival scenes and others are Sunday church services or family portraits. I was interested in the collective memories which are held in photographs of group scenes or domestic spaces, particularly those handed down from families who have emigrated. I feel the collages serve to reflect a more fragmented experience, through cuts or by recontextualizing them with other shapes. I am interested in the flattening which occurs when trying to historicize events. In this way, the camera can also flatten emotional dimensionality, and how the object can hold a weight that is psychophysical.

Working on the photos I would recognize facial features and ritualistic activities linked to my experience of my close family who emigrated to Wales. It became a confusing thing, personally, I found myself confronted with my difference. You go through so many transmutations as people of dual ethnicity. I was interested in applying these thoughts and feelings to the collages and then into a video work. I extracted a group of screenshots from family footage, of an ordinary Sunday. The collages feature elements from relatives who remained in Dominica.

PS: It’s interesting, the sliding scale of integration and all of the layers within that. Your family’s heritage and then with the next generation, of you bringing your British values to Peru and Mexico as well.
LT: Yes. I began working on the video after the collages were completed. By that point I had been away from the UK for some time, and particularly my mother’s family.

I’m interested in the politics of the room the video is filmed within. The dialogue veers in this mundane way, into a conversation about scaling class boundaries. I find the casualness and understanding that occurs between the characters quite interesting. The scene occurs in my grandparent’s house with my mum looking at ‘Loot’, in the real estate section, for a house for her pregnant sister. Now living in London, my uncle asks if my mother would ever move back to Cardiff.  Her response is slightly defeated, “No, we’re Londoners now.” I find the tension in the dialogue quite poignant, the idea of constant forward motion, which to me is a very Black experience. There is this sense of the need to accelerate handing over lessons or experiences to her sibling.

Growing up in the UK I found that conversations about class politics had dominated political rhetoric, without including intersections of race and no mention of colourism. In the work, I am trying to frame certain nuances about social mobility.

I am interested in framing and sharing these nuances, speculating on collective ambition. I wonder about poc bodies moving around the global south and how receptive those countries are to the stories of diaspora blackness inhabiting their spaces. I think it is still too early to draw any conclusions as Covid has brought many new concerns to how we can exist.

PS: What has been your dad’s response to your work?
LT: We visited the works at Hilario Galguera when El Cuarto de Máquinas was on exhibition. He is a musician. It was interesting we find ourselves moving away from a formal conversation as these are images from his memory. Perspectives are so varied when memory is at stake. This is what I find interesting about working with images that have many people.

PS: Was he able to articulate what he was feeling?
LT: That’s what I mean about memory, there is truly little logic. We each have a sensual memory, an olfactory memory, a sonic and a visual memory… All these act and work in unison to create nostalgia. I feel like there are wars, illegal expansions, genocides, and apartheids around the world that have to do with grief and nostalgia. That’s the complication when other versions of this enter pop culture. It’s like a snowstorm of grief and nostalgia. I would love this work to remind you why the past is beautiful but most importantly why it’s dangerous.

PS: And sometimes they’re used as a weapon — a blanket to mask what’s really going on, like egomaniacs trying to grab land.
LT: Yes, totally. Dogma is dangerous. In this way I wanted to make something more tentative, many are very small as they were made in transit.

PS: What does your process look like?
LT: I work in stages, gathering imagery and sometimes keeping it for a few years until a point that feels right. I’ll live with the things I’m making for a while. A lot of it is instinctual.

PS: Otherwise you might add in some nostalgia.
LT: Yeah exactly, but also there have to be some formal decisions. I collaborated with the composer Pierre Rousseau. Audio is such a mutable material, it also enters memory at such an unconscious level, holding a quality of sounding contemporary and timeless. There has to be a mysticism.