WE ALL LOVE A BIT OF BUSH

WE ALL LOVE A BIT OF BUSH

With the recent release of Kate Bush’s new live album and single, I’ve been spending far too much time lately (aka work avoidance), listening to her music, and also howling with laughter at her old YouTube videos.

I mean seriously, you haven’t lived until you’ve watched her lying in a huge water tank at Pinewood Studios with a lifejacket around her neck pretending to be lost at sea while contracting mild hypothermia after the first day of filming. Or explaining the theme behind the “Sat in Your Lap” video on a kids TV show in 1981 which involved crowning one poor kid in the audience a dumbass by sticking a ‘D’ for dunce hat on his head; or having an in-depth chat about how not to eat animals for dinner with the UK’s cuisine Queen Delia Smith, who also makes delicious cakes, without any animals in them.

The fact is, since she burst onto the scene in 1978, Kate Bush has become one of the rarest and most innovative performers and creators of the past 40 years – her ambitious, constantly evolving eccentricity and wide-eyed theatrics delivered with a touch of the surreal, like a mystic sorceress inside her own impermeable bubble, has cast a spell over all of us – yes, nobody can imitate The Bush. There is only one bush. We All love The Bush. Bush Rules. Is that enough bushes for you? 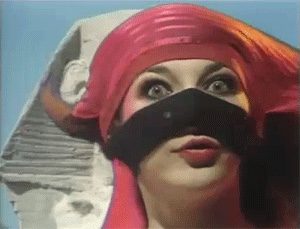 With creative ambiguous intent, always with paradoxical effect, her songs and videos are delivered with an unintentional or accidentally retarded hilarity, the dancing alone appearing unhinged alongside a dramatic wide-eyed abandon – her antics are to gifs what catnip is to cats, completely addictive and heavily parodied over the years – but those videos and dance moves were actually clearly thought-out and rooted in technique. Unlike you or I on a Saturday night when you’re seven kinds of plastered and think you’re dancing, but actually if there was such a thing as the Drunk Mess Olympics, you would win every gold medal in floor diving because nothing will ever be able to top that stunning performance.

But back to The Bush, and she may be a bit of a dumpling now (sorry weight watchers), but her voice is as gorgeous – more gorgeous? – than it’s ever been, it’s mellowed and deepened, as we heard at her last tour in London two years ago, live shows that were as audacious, weird and celebratory as everybody hoped they would be – the same shows where Björk, Grace Jones and Madonna all stood in awe watching as The Bush transfixed us all. Why, because Kate dances to her own tune, and that’s probably where Bjork stole her moves from.
Kate’s vocals are seemingly possessed but utterly in control, sliding from falsetto wails to guttural growls, like an instrument as a simple carrier of memorable melodies – unlike you or I at a karaoke bar, performing a stumbling, wailing disaster from start to finish and the only things missing from our act is a Martini and a mirror to see that your face singing resembles a dying cow in a wig getting shocked on an electric fence.

All that aside, did you know, Kate Bush and Emily Brontë not only both wrote ‘Wuthering Heights’ (the song and the book that inspired the song), but they also share the same birthday. Kate is 58 now, and Emily would be 198 if she was alive today. And until the age of 18, Kate was known as Cathy – a name she also shared with the central character of the novel that would prove pretty significant to her career. Spooky huh?
And another little known fact: the ‘he’s here, he’s here’ lyrics on the single ‘The Man With The Child In His Eyes’, are not on the album version single. Now you can amaze your friends with that detail…you’re welcome.

As she’s notoriously elusive and doesn’t like talking to journalists much (aka, she would rather be at home talking to her cats and an empty bottle of wine… maybe), I found a quote from a 1983 TV interview, that sums The Bush up, as in her quiet, lilting speaking voice, she admitted. “Yes, I think I probably am truly mad, you know?”
And 33 years on, that’s still alright with me Babooshka.